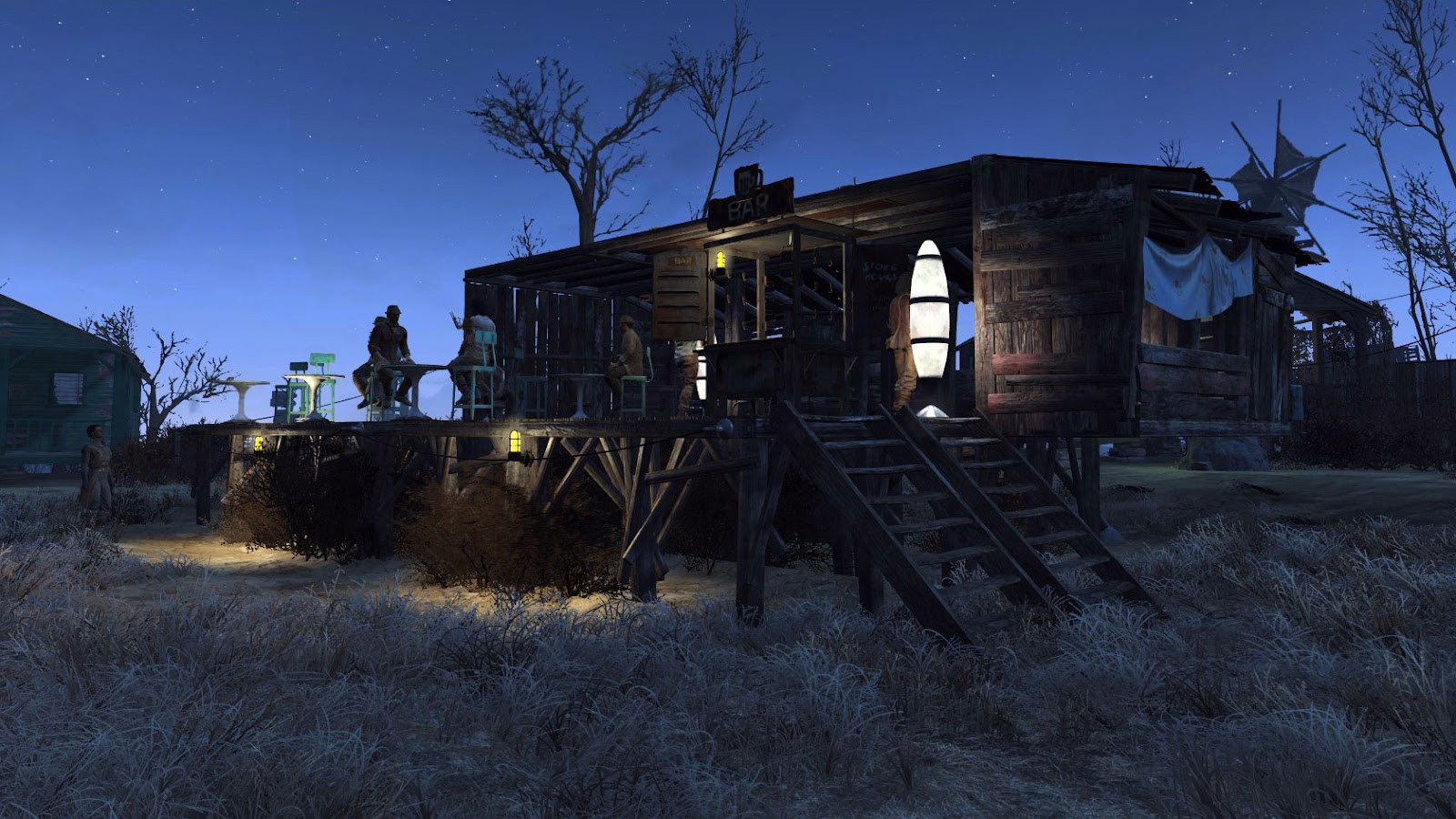 Settlements are the best thing they could have added to Fallout in my opinion, and I’m hoping they do the same for the next Elder Scrolls game. There’s a lot of information already out there on making settlements or tips and tricks, or explaining how to get things. What I’m going to do is try to list what I know about them so far, especially stuff I had to look up, into small bite size explanations to get you on your way.

Edit Jan 4, 2016: Made a few edits to this as I become more familiar with the settlement system.


How to start a settlement


Settlements will have a workbench you can search in order to activate it as a settlement. Some require quests to activate (most likely through Minutemen), some require clearing out enemies, and some can be activated right away. Here’s a list of all the settlements if you want to look for one specifically.


How to get a flat surface on uneven terrain


Under the structures tab > wooden structions > floor, there will be objects where you can create flat surfaces. Either with the standard floor, or the cement block, or the wooden floor with posts.


How to unlock more stuff in your workshop to build


There are two ways to unlock more stuff to build in game; finishing certain quests (like the one after retaking the castle or completing the Cabot quest line), or finding Picket Fences magazines. There are 5 magazines to find in all and here’s a list of all the Picket Fences if you are struggling to find them. There are mods you can add to the game to unlock more stuff as well.


How to select and move or scrap a group of objects

I had to strikeout group scrapping because I've never been able to do it. I've read you could, so it might exist and my game is bugged out, but for now I can't do that.


How to defend your settlement


You’ll mostly be attacked either from wooded areas or roads when you port in to your attacked settlement. Lay walls mostly at those vulnerable places with some turrets or guard posts. You also will get attacked from enemies sometimes that will already be in the settlement when you arrive, so have a turret or two, or guard posts, pointed inside your settlement as well. To safely port in, set up a small defensive spot that gives you a good vantage over the settlement and set the port-in rug there. The port-in rug is under resources > miscellaneous.


How to find a miscellaneous item


If you are having trouble finding something under the miscellaneous tab, it’s because it might be under another one. The main three miscellaneous tabs are under furniture, decorations and resources. Furniture has the majority of stuff you are looking for, decorations has radios and the jukebox, and resources has the scavenging station, brahmin feeding trough and home port-in rug.


How to connect settlement’s junk inventories


You’ll need to get the 1st Local Leader perk under the 6th level of Charisma. Then you will need to find an unused settler in each of your settlements and go into workbench mode. Then highlight the settler and you can set them up as a supplier, default ‘Q’. Select the settlement to connect to and confirm. Once you do, those two settlements junk inventories are now connected. Bonus that their water and food productions are shared too, so if you had a settlement with a lot of water, they can share that overproduction with any settlement attached to the supply line. Same with food and junk inventories.

Important note: You do not have direct access to other settlement inventories to deposit and withdraw from, only when you are modding, crafting or building will those shared resources be accessed for you. Example is I've put wood in Sanctuary, and go to Red Rocket. I can not pull out that wood, but when I start building, it'll show I have that wood to build with.


How to harvest extra food, water, junk and caps from settlements


How to make caps off shops


According to the shops, you just need to make them and assign a settler to it to start generating caps in the workbench.


However, it looked like I wasn’t generating caps initially. From what I’ve read online, for shops to make money, there may need to be unassigned settlers in that settlement to “purchase” stuff at stores. It may have been coincidence, or a bug, but when I did that, it looked like I started to get caps.


Except the food store. Settler’s will gather around the food shop early morning and late evening to eat even if they are assigned duties.


Upon further playing, it looks like I get caps whether or not I have any non-assigned settlers. I just need to have the store and wait a few days. Caps generate kind of slowly.

What can settlers do in settlements


When settlers show up, if you do nothing with them, they’ll either auto assign themselves to food or guard posts, and to unassigned beds. You will have to assign them to be a supplier, work the scavenging station or the store.

Unused companions can double as a settler

You can assign companions you aren't using to do stuff in your settlement like farming, guarding or even scavenging. Unfortunately they are really buggy when doing this and unstable so I usually just let them roam around.


If you have some neat information about settlements that took you a while to learn about and you’d like to share, please let me know and I’ll add them here.
Posted by Tyrannodorkus at 10:58 AM