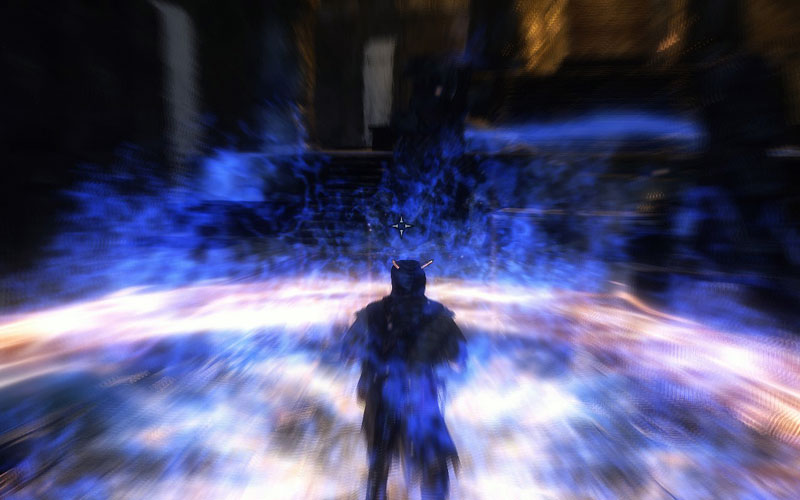 Crowd control, that annoying stuff which happens to you in combat and frustrates you to no end, or lowers your damage per second when Frank wanted to try his confuse spell for once instead of hitting them with the same fireball, then ice blast, then lightning bolt over and over till the monster is defeated.


They were a set of abilities from the old days that used to help the group actually take on large groups of enemies or even kill them faster in some cases. Imagine that next time you throw away perfectly good sleep spells, they used to help kill stuff faster and more efficiently. Nowadays, it’s who has the hardest hitting sword, or fastest spell cast. Crowd control has certainly fell from grace. Even more so with two specific abilities; Fear and Knock-back. I had to come to terms of taking those abilities off my hotbar in some games because how much trouble they cause.


Back in EverQuest, a necromancer could gather a group of enemies, cast dots on them (damage over time) then slow and fear them. This would slowly send them away and sometimes send more enemies back to the necro. This process would then be rinsed and repeated. It's not flashy, but it got the job done. People were jealous of necros because they could do this.


Fast forward to today, and you'd be asked to stop fearing because a lot of abilities are dependent on a mob staying in one spot. You also ran the risk of getting additional enemies. Same could be said of the knock-back abilities. It’s also not worth doing because most crowd control abilities were shortened to be only a few seconds long.


So what happened? It became more apparent that players like using them on others, but hated to be hit with it themselves. So focus was pushed more on damage abilities and shortening the time you could be feared, dotted, blinded, or mezzed (which was basically sleep). I personally like how I can come out of these effects pretty quickly now, but do missed how important they were. So seeing how crowd control has become a shadow of its former self and we can’t go back to the old days, I believe it’s time to rethink it all together.


How can we make these abilities important again, while simultaneously lowering impact to player fun (or enhancing it if possible)? Can we make this a viable choice again and turning the trinity into a quadrinity? My focus would be to keep players in control, real or imaginary, while using or getting hit by crowd control abilities. I also want them to feel safe using them, where they can contain the fight. Here are my suggestions.


Knock-back annoys people when you knock them out of your attack circle. The only place I saw knock-back as something epic was watching Sauron knocking some heads at the start of the Lord of the Ring’s trilogy. So I propose all knock-backs be converted to knock-downs with the exception of a deathblow where the enemy goes flying as they are defeated. Merge most uses of this ability with hard hitting finishers. Although an issue would arise if you knocked an enemy off a ledge. This is an easy fix if you have a reward system that automatically gives the loot to the player, or you will need to leave loot at the position the enemy died, before knock-back, in a chest or sparkly node.


Since this ability also does more harm than good in the hands of new or less seasoned players, any dedicated knock-back abilities should be high in the skill tree, out of the reach of learning players struggling to find an ability not on cool-down.


Fear can be more than just making the enemy run in terror. Have you seen a deer staring into headlights? They don’t more at all. My suggestion is fear should become a multi-effect. Affected enemies should cower in fear, not run from it yet. The stronger the fear, the more effects it provides and they add to the previous tier. I figure this to be a defense disabling skill.


These are some oldie, but goodies I miss from the old days. Since forcing someone to go to sleep in battle would leave them open to a coup de grâce, and wouldn’t be fun sitting around doing nothing. That would give huge negative feedback from players. So we’ll have to go the same rout as fear. Multi-effect abilities that would add more effects the stronger it is, and an opposing ability to fear, this will be an offense disabling skill.


I would also suggest changing sleep to drowsy.


Discussing this with my brother lead us to feel we are on to something with multi-effects. A smart system that packs a punch the stronger it is. This also allows them to be themed or customized for different classes. For instance, fear from a warrior would change the final tier to lose some buffs instead of causing them to keep out of melee range.


This system could even be used on other old crowd control abilities, modernizing them. Abilities like root, paralyze, confuse, charm, and daze could all be made to still allow the player to have some control in the fight without forcing them to play the waiting game. Example would be having paralyze causing a percent chance of interrupts when players use skills, or charm keeping you from using direct attacks on certain enemies while any AoE heal would heal them.


I really want crowd control to be viable again, so I hope this can help any aspiring or thriving developers.

EDIT (March 2, 2016): Made an alteration for clarity "causing them to keep out of melee range" and replace the second confuse with daze because I didn't catch that in my original proof reading. :/
Made addition to Knock-back.

Posted by Tyrannodorkus at 8:00 AM