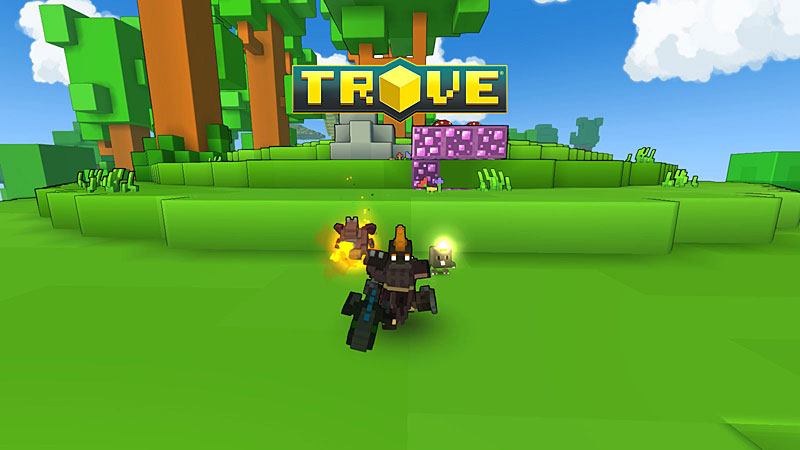 Trove: A blocky, vector colored wonderland of procedurally generated dungeons and landmasses. A game made for the easy coming and easy going. For a player, such as myself, that sometimes just wants to shut down and play, Trove fills that need.


A couple of fellow bloggers, I found, gave us their impressions and thoughts on the casual sensation. I suggest checking them out as well.


When I first heard about Trove, I just thought it was a Minecraft copycat. Nothing more than a cheap ripoff cashing in on the fame. A very harsh opinion from not even looking into it - that is, until I started seeing some reviews, impressions and seeing comments about it. This intrigued me to the point I wanted to play it myself. And so I finally did (about a month later than I wanted to, but better late than never, amirite).


For my first impression, I spent a good hour and a half playing through the starting zone, which is solo, and the first adventuring zone, which is contested. (For those not in the know, contested just means a zone where other people are too. Not an instance where only you and/or some friends can be by yourselves without others showing up)


The starting zone was a nice little introduction and playground to tromp through with little danger. The level only required you to use the movement keys, follow a path and defeat the monster at the other end and collect your treasure. Being an explorer at heart, I did not follow the path, instead I played in some waterfalls and found a character customization area. After you’re finished there, it wants you to teleport to the home world hub - a large lobby area where everyone goes to the city for services. I haven’t messed around there very long before I went to the first adventuring zone.


The adventuring zone wasn’t as unique as the starting zone, but it was large. There I learned to summon my house, find and finish dungeons, defeat bosses, and collect resources and items.


After spending an hour and a half in this little charming world of wonder, it allowed me to reflect on my opinion of Trove. I no longer think it’s a cheap ripoff of Minecraft. I’m sure it used Minecraft as a starting point, but it took off in a different direction. Both games offer exploration, fighting, crafting and dungeons in a blocky, voxel environment, but how they’re presented differently changes the overall feel of the game and gives you a unique experience from each other; one I suggest trying out for yourself.


If you’re still not sure, I’ve included a video below of that hour and a half edited down to an 11 minute experience for you to enjoy.


This post is part of a series of Blaugust posts. You can find more about Blaugust at the 2015 Blaugust Initiative Page.
Posted by Tyrannodorkus at 10:51 AM